A federal fishery council vote Monday could set the stage for future cuts of up to 35% in the incidental halibut take of a largely Washington-based trawl fleet that targets yellowfin sole and other flatfish.

The high-stakes 8-3 vote in an online meeting by the North Pacific Fishery Management Council is likely to result in a big financial hit to this fleet of 19 bottom-trawl vessels. The fleet’s annual $350 million in revenue could be reduced by up to $110 million if halibut stocks are found in surveys to be in very low abundance, according to industry officials.

The council action followed several days of often emotional testimony in an ongoing fisheries battle over the scope of the trawlers’ catch of a revered flatfish — found off the west coast, British Columbia and Alaska — that surveys indicate have largely been in decline during the past 15 years.

In 2019, the bottom-trawl fleet’s incidental take, or bycatch, of halibut tallied nearly 3.1 million pounds as vessels used huge nets to scoop up 635.4 million pounds of yellowfin sole and other flatfish. For the trawl fleet, these halibut are a prohibited species and must be jettisoned overboard.

Some of those trawl fleet’s halibut discards survive. But in 2019, 1.4 million pounds’ worth of halibut did not survive the nets. And over the years, the scope of these discards has angered tribal, sport and commercial fishers who land these fish with hook-and-line gear.

The bottom-trawl fleet’s current cap is a fixed amount that does not vary from year to year. If the fleet reaches that cap, the vessels must stop fishing. The council lowered that cap by 25% in 2015 and the fleet has stayed under the limit. But that action did not quell the movement to further lower trawl discards.

Opposition has flared among halibut fishers in the Northwest and Canada, and has been very intense in Alaska coastal communities.

Halibut fishers have seen their own quotas shrink and have demanded that the trawl fleet’s halibut take also come down. In many Alaska costal communities, halibut is often both an important local food source and also a significant source of revenue when sold for processing and delivery to seafood markets in the United States and elsewhere.

“Halibut bycatch must be reduced immediately,” said Simeon Swetzoff Jr., a former mayor of St. Paul in Alaska’s Pribilof Island and a Bering Sea halibut fisher who has long lobbied to limit the trawl discards. 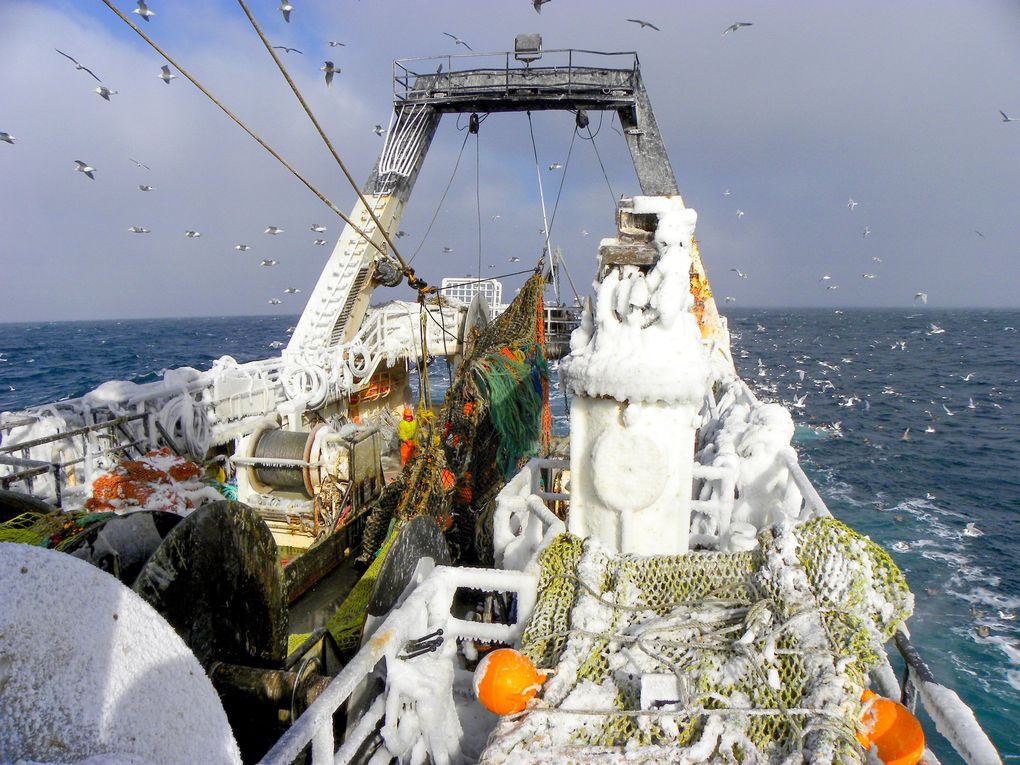 The nets on this vessel are pulled along the bottom to target flatfish in areas of the Bering Sea where halibut also are found. The halibut brought on board must be thrown back. (Courtesy of Groundfish Forum)

In the Bering Sea region, the amount of halibut last year thrown overboard by the trawl fleet exceeded the amount caught by hook-and-line fishers. In his council testimony, Swetzoff said that the “bolts (on the trawl fleet) need to be tightened. … We have tried everything there is to possibly do.”

Representatives of the bottom-trawl industry say that over the past decade they have made major strides in reducing their bycatch. Those efforts include cooperative efforts to avoid halibut hot spots and deck-sorting to more quickly return halibut to the sea. They are doubtful they can make further reductions to comply with the council action, which could reduce their discard quotas by up to 35% in years when surveys indicate halibut are in very low abundance.

“We are shocked that the council made this decision, and come to this conclusion,” said Chris Woodley, executive director of the Groundfish Forum, which represents the bottom-trawlers known as the “Amendment 80” fleet.

Woodley said that the fleet is a huge provider of frozen fish protein. Much of that fish is exported to Asia but it includes fillets marketed as flounder skinless fillets that can be found in U.S. supermarkets. He said the action will hit hard not only boat owners but also some 2,200 crew who catch and process this fish.

Industry officials say that they would likely have to tie up their boats long before their total flatfish quotas are caught. That could result in this fleet providing up to 200 million less fish meals, according to statement released by the Groundfish Forum.

Woodley noted that an analysis by council staff found that the overall “net benefits to the nation” from this action would be negative. He said no decision has been made by his group about whether to eventually pursue legal action over the council’s action.

The council, with 11 voting members, was formed by congressional legislation and is empowered to come up with harvest rules that are then put into final form by National Oceanic and Atmospheric Administration Fisheries.

The council is composed of fishing industry as well state and federal officials, with Alaskans controlling the biggest share of the voting seats on the council.

Alaska council members who voted in favor of the message were joined by one Washington state council member and a federal representative.

Their leadership to push through was praised by Jeff Kaufman, a vice president of the Central Bering Sea Fishermen’s Association who said it will “better manage the resource.”

Those opposed included Bill Tweit, a Washington state Department of Fish and Wildlife official who questioned whether the surveys that would be used to determine halibut abundance were accurate enough to put this new rule into action.

“No changes to this framework would make this defensible and actually functional,” Tweit said during the council meeting. In his remarks, Tweit also said that the current conservation management is capable of maintaining adequate stocks of spawning halibut.